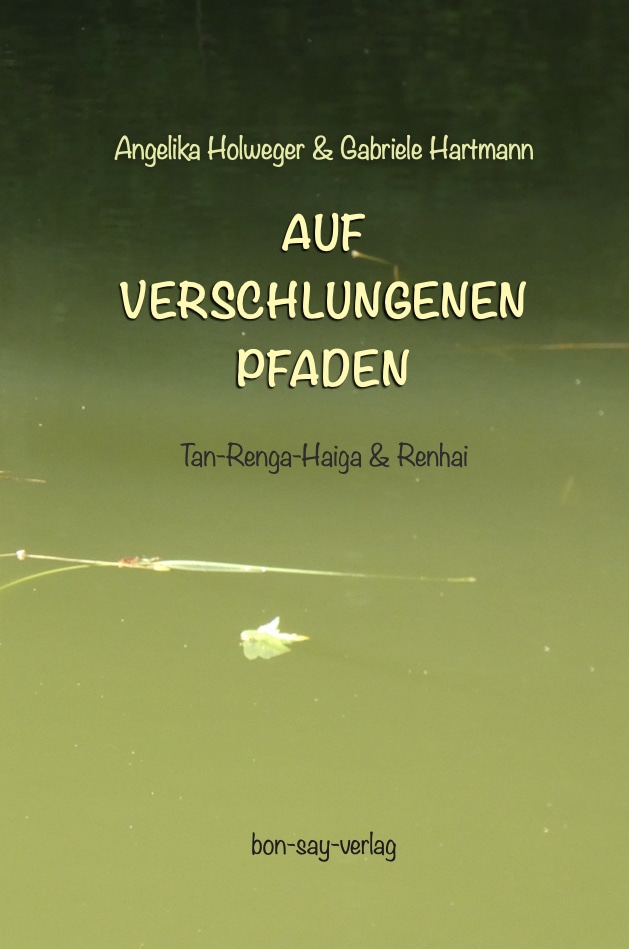 Anyone who takes this book in their hand will notice the artistically demanding and wonderful layout by Gabriele Hartmann even before the first line has been read. The cover in shades of green and yellow, based on a photo by Angelika Holweger, evokes associations with Bashô's frog pond, the title "On winding paths" points to stories that want to be explored and found and that can be read in different ways, depending on the focus and mood of the Reader.

The special thing about the Tan-Renga-Haiga is that the texts are not inserted into the actual images, but into the transparent reflections of these images underneath. These reflections are repeated, again mirrored, on the lower edge of the opposite pages with the Renhai - a design that makes the book a visual delight just by leafing through it. On each four pages a feast for the eyes with great reading pleasure follows a double page pure reading pleasure with a reindeer shark on each page. The abbreviations "AH" for Angelika Holweger and "GH" for Gabriele Hartmann provide information about the authorship of the verses. On a total of 56 pages the reader will find 16 Tan-Renga-Haiga and 31 Renhai.

Gabriele Hartmann was granted project studies by the Rhineland-Palatinate Foundation for Culture for the artistic design and publication of this book.

The book begins, which I personally like very much, with a Tan-Renga-Haiga that takes into account the different geographical habitats of the two authors. Angelika Holweger (AH) lives in the south of Germany, Gabriele Hartmann (GH) in the middle of the republic, which, if wanted, can be reflected in linguistic expression.

inclined towards each other
Bird and fish

The accompanying photo by Gabriele Hartmann shows two wooden masks, which in turn would go well with the “Swabian-Alemannic Carnival”. Especially in the fools guilds around Lake Constance, there are masks that are based on birds and fish.

The book contains strong texts throughout, with strong verses that could often stand alone as haiku.

so much light on their wings
choose aperture 4

A renhai begins with the first line in bold of the second, middle verse. In this case she wrote Angelika Holweger (AH). Gabriele Hartmann (GH) added the second line of this verse. Then AH wrote the third verse and only after that GH wrote the first, the opening verse.

The passion of the first verse, when reading from top to bottom, gives way in the second verse to the objective consideration of choosing the right aperture for a photo in order to capture the shine of the wings. In the last verse it ends in a night full of sensual and spiritual impressions. In the order in which the Renhai came into being, it reads the other way round: First the light on the wings (a religious symbol or a symbol for the power of God?) Is captured with a camera, then the almost sacred night ends in passion.

However, it is completely irrelevant in which sequence the Renhai are read, from top to bottom, ie from the first to the third verse or in the order in which they were created, they leave a lasting impression in any case.

As shown in the example above, all texts in this book combine spirituality, emotionality, natural events and spectacles with everyday and current situations. Feelings and memories, family and other relationships, fairy-tale and traditional things and not to forget the music find their place in the verses of the authors.

so many stars
on the flags -
heaven everywhere

disguised words
the dictator says
he just wanted her best

Here is a coffee table with fine porcelain, as delicate with its shining gold rim as clouds at sunset, as an alternative to the political reality in which a dictator wants to swear the people to his line. And these people willingly wave their flags with the many stars and believe in heaven. As I read it, I immediately think of America and a president who wants to stay in power by lying the blue of the sky, but also of other states in which politicians want to usurp sole power.

In the Renhai “without a mask” and “talkative” the current reality is summed up in lyrical form and three verses.

whether she smiles?
Luna is veiled

deep bow
the Chef de Rang accompanies us
to the door

in the evening the talkative sparrows
from the colored ivy

she tells haunted stories ...
far too often it fills
our glasses

Grandiose how Angelika Holweger and Gabriele Hartmann let their thoughts play out on many levels, link them together and tell the reader wonderful and multi-layered little stories from life and about life.

At the end I wanted to quote a favorite text, but I have grown dear to so many that it is impossible for me to give priority to just one.