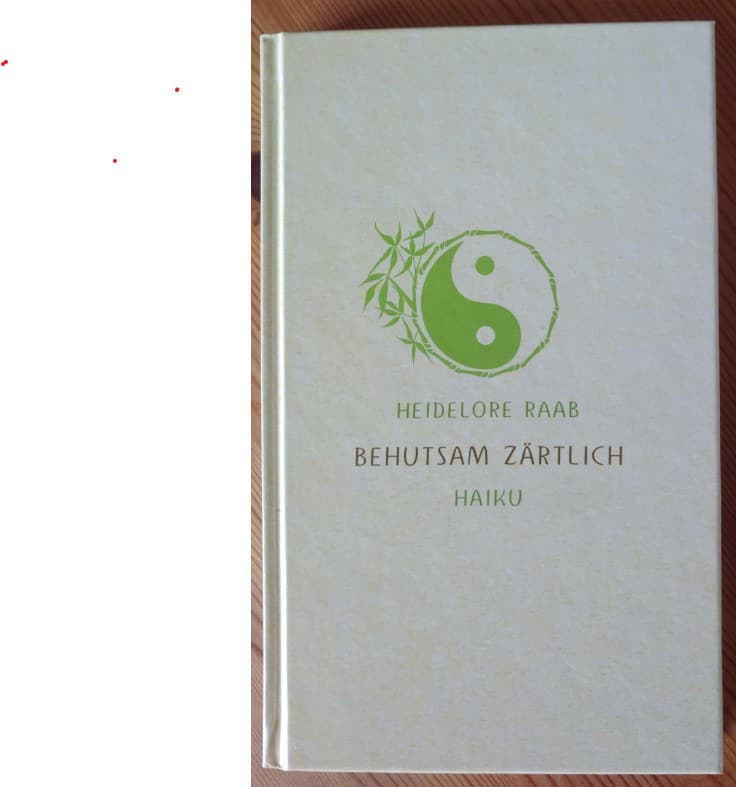 The archive of our library includes all DHG publications including the specialist articles that have been published since 1988. Since 2020, over 1000 documents have been made available. A service that is financed and maintained from the membership fees. For non-members we put »12 articles for free download bready to get an insight into the extensive archive. Membership is required to gain full access to the archive »Can be requested here.

The simple design of the Haiku band "BEHUTSAM ZÄRTLICH" is aesthetically very appealing. The cover is dark, creamy white all around. The front is decorated with a Yin-Yang symbol painted in light green. The lighter part of the symbol area is left in creamy white. To distinguish between the background and the light symbol area, a branch in light green color winds around the whole symbol in a circle, which leaves green leaves to the left of the symbol. If the leaves weren't light green in color, I'd guess blooming wild clematis flowers.
Below are three lines in the middle: Set in the same light green as the symbol is drawn, author name and subtitle; between these the title in a dark red-brown. The choice of font and the choice of all three texts on the front of the book in capital letters result in slender, well-formed movements.
The imprint is just as restrained as the book design. If the reluctance to use the cover is very appealing, the imprint lacks references to the fonts used, which play their part and in turn give the book its very appealing impression.

There are three texts on the right-hand side of one hundred pages of the book. Without chapters being specified in the book, the following sequence of topics results when reading: Winter - Spring - Corona - Spring - Summer - Autumn - Winter. The first three texts are on page 11:

With the first, trickling snow crystals cover up traces. This is formulated in an open manner. Since the text is in a haiku volume, I think the reader is asked not to stop at the text as a natural poem, but to discover its haiku character.
As you can see when reading the book, which is also aesthetically designed with the side mirror, there are many descriptions of nature that can be transferred to a human situation. For example already on the following text page 13:

In this rough night
crushed by the snow -
old apple tree

This example formally shows the structure often found in this book, namely that the first or third line is separated from the other two by a dash.
Some texts are set in the 5-7-5 scheme. However, the author often expresses that deviations can just as well be indicated. Such a successful Senryu can be found on page 55:

That this text has its place in the middle of summer may raise questions. What did the author think? Was it summer when she made this discovery? Or do we have to accept that death can be present at any time of the year?

Be that as it may: The experienced author puts an aesthetically pleasing collection of haiku into our hands. Many of the texts speak for the careful observation of nature. In my opinion, a haiku on page 27 speaks for the author's humor:

The author proves a good feeling for the current situation in her Corona texts on pages 37 to 45. The fact that she has a page like page 33 with three continuously rhyming children's verses could be seen as a style break. In view of the extensive author's bibliography at the end of the book, I would like to regard it as a cautiously affectionate rogue.