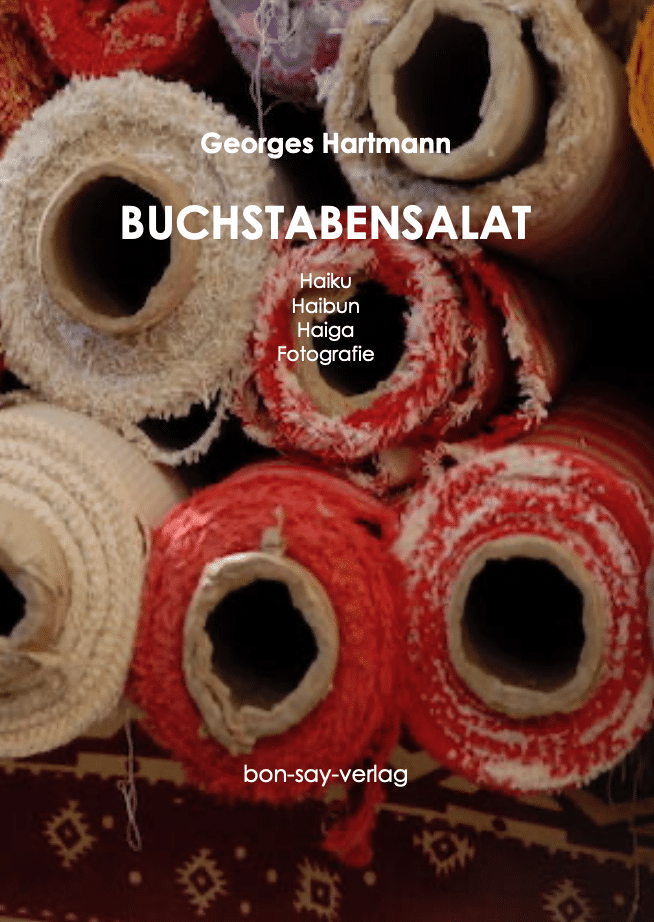 A truly Janus-headed work. If I leaf from one page to the middle of the book, I find myself in Gabriele's “reading room”. If I turn the book 180 degrees, Georges treats me to “alphabet salad”.

LETTER SALAD
The “alphabet salad” by Georges comes across as modest, you shouldn't be blinded by it: It's about vitamin-rich food, vitamin B like “basho” and empathy for fellow creatures.

the blackbird bathes
in the babbling village fountain
I would like to do the same for her (p. 5)

He doesn't have to be mentioned - the "worried" loser - and yet he has our full sympathy:

Tug of war in the grass
and again the blackbird flies
as the winner from the pitch (p. 11)

Günter Kunert writes in one of his poems about flying fish that are thrown away because of the lack of singing. On the same level as this, Georges writes:

Now that you're gone
the roses are in full bloom
want to show you (p. 17)
As long as nature outlives human testimonies, there is cautious consolation:

the dog roses
on the disused railroad track
blooming like every year (p. 20)

Georges Hartmann's haiku always seem strongest to me where they show abandonment, evoke the melancholy of the ephemeral:

After the end of the season
played on the mini golf course
all alone the wind (p. 5)

The little cardboard sign
at the door to the ice cream parlor
shimmers in the autumn light (p. 18)

Dancing snowflakes
but the sledge in the cellar
only knows the dust (p. 21)

To describe the haiku poet Georges Hartmann, this aspect is only "half the battle". There is another side of downright Taoist equanimity:

In the glow of the sun
the dog bothers at the front door
not on the cat (p. 10)

The fog may be a reality; it is not impenetrable:

In the thick fog
I hear the bright laughter
playing children (p. 17)

Not a handicap that cannot be made into something - even in winter:

It's snowing again outside
he reads the signatures
on the leg cast (p. 21)

READING ROOM
It doesn't have to be the escape from the rain that leads me into the “reading room” - even if the eponymous Haiga on page 2 suggests this possibility. There is always a lot to discover - from the simple and profound snapshot:

Barrel organ game
deep in our pockets
the hands (p. 11)

representations
the desire for an old stitch
to scratch (p. 14)

The "gray suburb" almost forces the misreading of "gray prehistoric times", where the narrowness of the past seems spatialized and downright disturbingly present:

"Old pond" is more than just a throwback to basho; a famous fairy tale by the Brothers Grimm also gets a second chance:

The Zen root of haiku poetry, MU as "awakening to the fact" reminds me:

tension
the canvas is purring
together (p. 11)

Apparent embarrassment, apparent failure turns out to be a gift of success:

Mastery is especially to be awarded to the Haibun. “Eau de Cologne” is not about perfume, but about high-proof drinks and their potential danger. In the midst of sayings that play down, lull, and trivialize, two coasters on half-full glasses become an act of confession, which - the final haiku suggests - is easier to do in pairs:

For me, "Lent" (p. 7) is already - and not just because of the reminiscence of Camus - THE haibun of the corona pandemic.