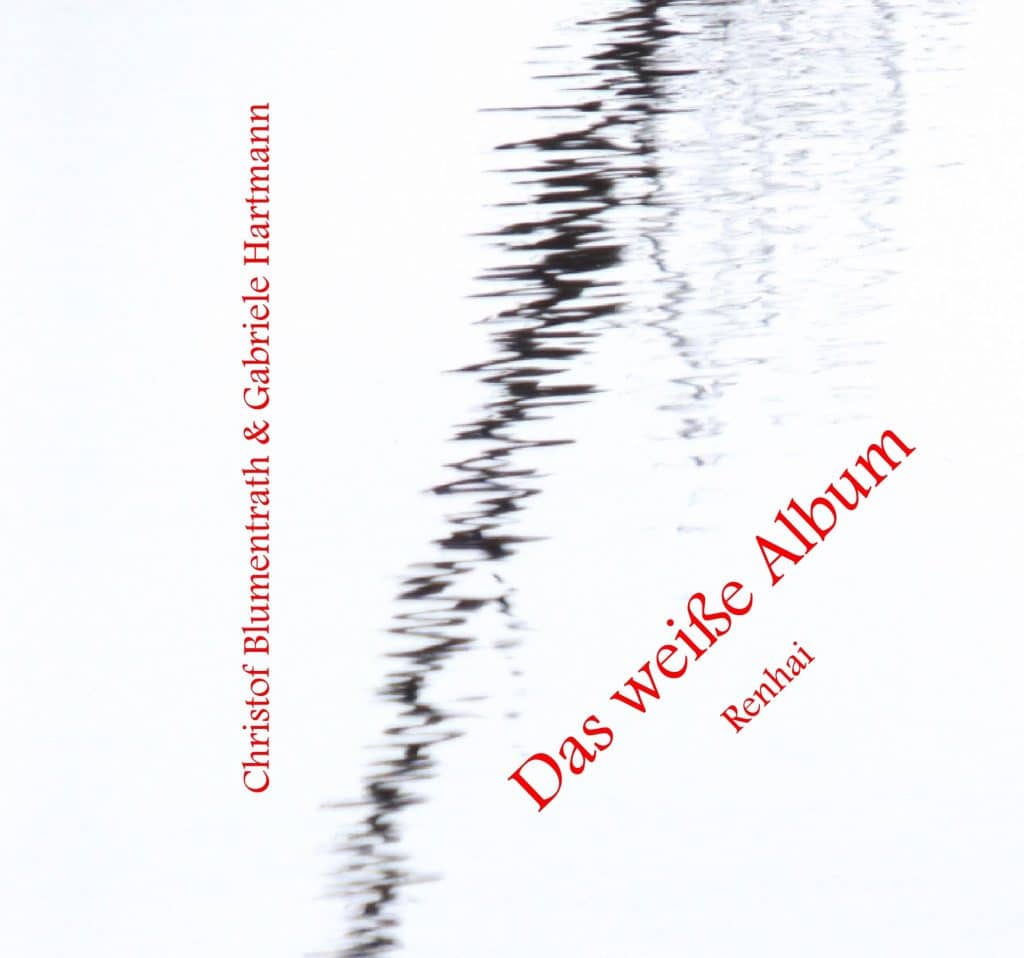 30 reindeer sharks and 11 photographs
The Beatles' white album was the inspiration for the book of the same name with Renhai by Christof Blumentrath & Gabriele.
The respective song title (T) finds its place as the first line of the second verse. The first author writes both the first (three-line) verse and the second line of the second (two-line) verse. Then the second author writes the (three-line) final verse. A headline was deliberately omitted ... but that is not much more than dry words that describe the process of writing. The two authors were inspired by the song lyrics and yet interpreted them freely.

Beate Conrad writes in her
Feature on chrysanthemum.com on October 28, 2020

The white album - a review

The Beatles' only double album, released in November 1968 and also called The White Album because of its plain white cover. A mix of many different styles of music and the beginning of their divergence. Even if the album was very successful commercially, not all of the songs corresponded to the listening habits of some Beatles fans at that time (and maybe still today), the songs were too randomly arranged according to the previously released concept albums "Seargent Pepper" and "Magical Mystery Tour" .

Now it's in front of me - The white album, not on vinyl, but in book form. Square white with black lines reminiscent of sonagrams. The title and the names of the authors are kept in red.

Gabriele Hartmann (GH) and Christof Blumentrath (CB) wrote Renhai together, thirty in number, with the titles of the thirty songs on the album as the respective starting line of the second verse (T) with which a Renhai always begins. One of the authors (GH or CB) wrote the second line of the starting verse and the first verse, the other completed the third verse.

Back in the USSR
not melted yet: the snow

Look over
bogged down on the shore
his paper boat

Do you have to know the songs now to like this book? Do you have to have the melodies and lyrics in your ear? The answer is a clear no". The threads that Gabriele Hartmann and Christof Blumentrath spin around the song titles and weave into completely new texts stand for themselves.

I also didn't know most of the songs on this album because I've never heard through the entire album. Out of curiosity, I then downloaded and read all the lyrics of the album from the Internet. If you want, you can discover associative links to the songs in the Renhai. The Beatles, or John Lennon as the author, quote "Strawberryfields" and other songs in the song "Glass Onion". I personally found the strawberry fields as "endless fields / in changing red" (GH). And in the last verse, whoever holds “his last piece of the puzzle” (CB) in his hands has put together the song with all of its allusions:

rotated twice
his last piece of the puzzle
Evening twilight

No background knowledge is required to enjoy the reindeer shark of this book. It is not necessary to work your way through this Beatles work to enjoy it or to be amazed, as Gabriele Hartmann and Christof Blumentrath have always managed to spin their own works around the song titles.

However, I assume that the two of them listened to the album and were also inspired by the music, especially the songs, which do not have much textual content, such as: B. "Revolution 9" and "Good Night", the last two tracks on the album. "Revolution 9" is an experimental sound collage, a musical inferno with spoken scraps of text. This became one of my favorite reindeer sharks in this book:

the way i turn
and turn: Satan stares
from the mirror

there!
a thread of tinsel
in the Easter fire

And the title of the Lullaby "Good Night, Sleep Tight" inspired the reindeer shark

Sommerabend
her body smells
after horse

Good Night
kissed on the forehead

the crown
the heavenly ladder crowns
a horseshoe moon

And don't just touch the Renhai. The artistic photographs in gray tones, surrealistically abstract subjects by Gabriele Hartmann and almost unreal snow images by Christof Blumentrath, fascinate as cool and mysterious companions of the stories captured in the Renhai.

The co-authors have been a well-established team in the writing of Renhai since 2016, but also Tan-Renga, Renga, Haiga. Among the previous Renhai, which Gabriele Hartmann wrote with various lyrical partners, this volume stands out due to the number of texts (30!) And the sophisticated bibliophile design. Impressive, sometimes puzzling pictures in black and white enter into a stimulating trialogue with the underlying music pieces and the printed partner seals.