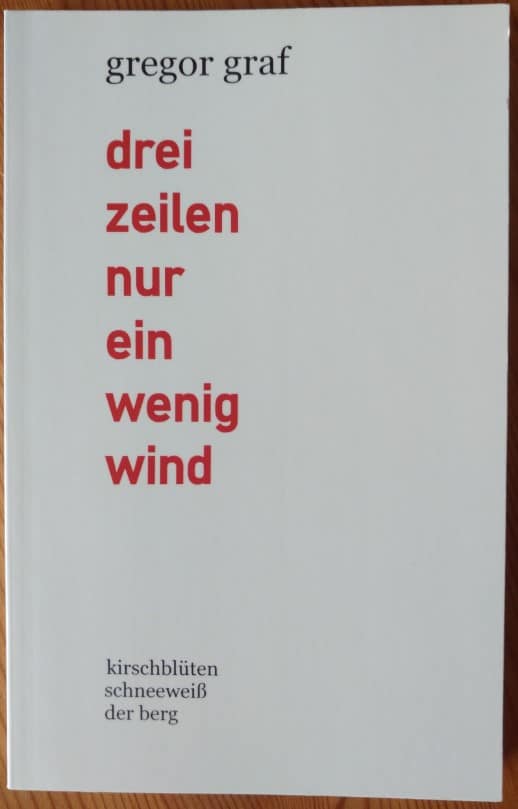 The archive of our library includes all DHG publications including the specialist articles that have been published since 1988. Since 2020, over 1000 documents have been made available. A service that is financed and maintained from the membership fees. For non-members we put »12 articles for free download bready to get an insight into the extensive archive. Membership is required to gain full access to the archive »Can be requested here.

the plane
like a sparrow
would be enough for me (p. 3)

This commitment, which is as simple as it is profound, opens the band. Each three-line has its own book page. The sequence of the first five chapters is the well-known: The New Year is followed by the four European seasons. What is new compared to the second volume by Gregor Graf (nothing more, three lines only) from 2018: This time, the chapter headings are not simple nouns, but appropriate minimal extensions. The New Year is called “a new year”. This chapter ends with the haiku:

in front of the window
the sparrows
argue again (p. 13)

The chapter "finally spring" begins with the haiku:

I like the narrative flow that runs evenly across the three lines of these texts. Gregor Graf describes in simple words what he is listening to nature and his surroundings. The choice of words that seem so calm, it seems to me, allows the reader to participate in the author's intensive listening. Quiet humor appears in the short poem on page 40:

summerly
the hole in the stocking
by the big toe

Who doesn't think of the summer slump?

The sixth chapter is unusual: “where from - where”. Because of this chapter, does it seem to me that this volume of poetry leads not only through the year, but also through a lifetime? His first of fifteen texts reads:

The assumption that the author might have been thinking of a whole life while writing is reinforced with the second text from this chapter:

back then
when the linden trees were in bloom
fragrant (p. 70)

I see “back then” as a look back at a wonderful time in my youth, at a special part of it. This is matched by the result of a formal census. In this chapter I count two haiku and thirteen short poems.

At the end of the book, Graf quotes the Spanish poet Juan Ramón Jiménez:

Graf adds the translation as it can also be found in a dtb; but he puts them in a new order:

And i will go.
And the birds will
stay and sing.

This means that both the three Spanish and the three German lines are set very nicely. They are formally there as haiku in free forms. But if you know that these two sentences are the beginning of a larger poem, you may now also be of the opinion: You are thinking about your whole life. The title in Jiménez is: El viaje definitivo - translated in Diogenes paperback 20388 as: The final journey.

For me, “Drei Zeilen just a little wind” is a new Haiku band that radiates carefully chosen and carefully placed poetry for the receptive reader. That the poet never uses the 5-7-5 scheme once - perhaps a flaw on the haiku side; In terms of reader friendliness and poetry, I think it's a plus. Gregor Graf is a master of tinting, a gentleness in a nutshell. Fortunately, he lacks the acuity of the aphorist.