A breath of wind too cool 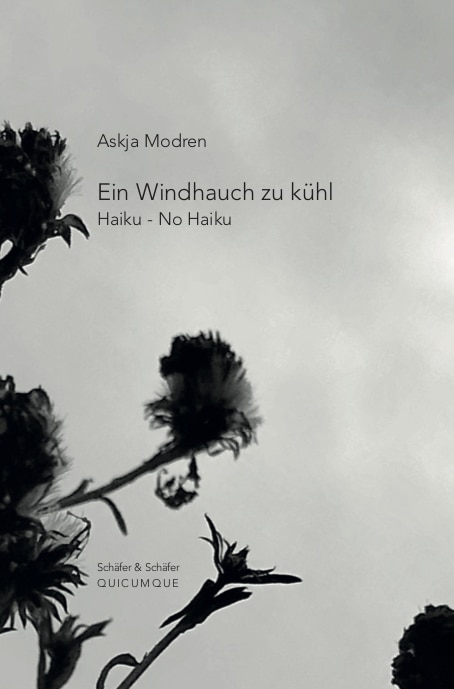 A breath of wind too cool

"A breath of wind too cool" lies in front of me in a high-quality, bound edition with a ribbon, with a black and white designed dust jacket. The three-line printed on the back promises "magical moments". First of all, if you only expect "classic" haikus from this ribbon, this is out of place. Either you have to look beyond the classic definition of haiku, or you can take a look at the three lines as - as noted by the author - the texts as haiku-inspired short poems, as promised in the chapter "About this book (p.114).
Henry Walter Bates's quote "The process by which a mimetic analogy is brought about in nature is a problem which involves that bof the origin of all species and all adaptions" (p.9) is not very enlightening at first, but it stops my curiosity , because the quote needs to be translated first and then sees me with question marks rather than clarity. First I leaf through the booklet; Three lines - mainly in German, partly in English - are placed in a reader-friendly manner with one or two works per page - partly pleasantly illustrated by black-and-white photos that take up the mood of the individual texts without being necessary for understanding.
The texts are divided into 3 chapters - who suspects the classic season arrangement is wrong. Rather, we have a tripartite division, which - explained in the table of contents on p.113 - does not provide any knowledge either: Far Eastern characters (Japanese?), "Dismorphiinae" and "Libera me" can probably only be understood or interpreted through the texts themselves ...
In addition to the variance in content, the texts themselves are also very variable in terms of form and language - and are always pleasantly surprising. Classic three-liner lines such as "One yard further - / A circular saw shrieks / The midday rest." (P.48) alternate with linguistically clear words, such as in "Do your best / and really accelerate that is what she / shit tight of the bra", through to evaluating three-liners, which are no longer generally regarded as haiku, for example “A flake / on the tip of my nose. Now? At this time? ”(P.107).
The texts are not uniform, consistent lowercase of the words, the uniform absence of punctuation marks, no, here too Askja Modren does not find a continuous line ... language changes from German to English within a three-liner, Askja Modren also surprises the reader in various places.
Altogether a volume full of three lines to think about, not just to consume - whether as haiku or haiku-inspired, the inclined reader may discover for himself ...