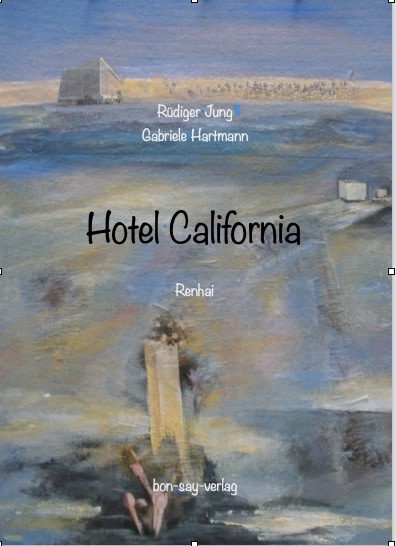 Rüdiger & Gabriele took their inspiration for Renhai from the Eagles' album “Hotel California”.
The titles serve as the starting line (first line of verse 2) and the authors compose their linked verses alternately. Rüdiger preferred the titles in English, Gabriele translated them freely.

do not turn around
only once in a lifetime
this includes

In the fast lane
we drive blindly over red

all in one
Card - Russian
Roulette

Hotel California, who doesn't know this song by the Eagles, this song about a traveler who is stranded in the middle of the desert in a hotel whose residents and ambience seem attractive and at the same time eerie to him, but he cannot escape their entrances and whispers, may never be able to escape them again - temptation and nightmare at the same time, a drug intoxication? Hotel California is the title track of the album of the same name. The other songs are about the American West Coast lifestyle in the seventies, sometimes in the style of a ballad, sometimes with guitar rock, and country sounds are not neglected either. The lyrics are about life and love.
What happens when the songs on this album are reduced to their titles and new stories are found about them? Gabriele Hartmann (GH) and Rüdiger Jung (RJ) tried that out and so a booklet with 18 Renhai was created. 18 Renhai, even though there are only nine tracks on this album? Yes, because that's what makes this booklet so special: There are two versions of each title that face each other. Each of the two authors followed their inspiration for the titles - which form the first line of the second verse - then wrote the first verse and thus provided the template for the third, the last verse, with which the other Author then finished the Renhai. RJ takes the original title as a starting point and GH brings the Renhai to a close (always read on the left side of the booklet).
thirst
awakens this in me
Fata Morgana
Hotel California
sounds so orange
Imagination and luck
the flower children dance
Reigen
RJ T RJ GH
***
White smoke
the prisoners of the night
gathered
Hotel California
laughter dies in the mirror
nothing
gives the silver
back
GH T GH RJ
In her versions, GH freely translates the original title into German, formulates her verses on this and RJ completes the Renhai (to be read on the right side of the booklet). Two very different versions, which in principle are based on the same basis, face each other.
no question
the bush drums
function
New Kid in Town
formerly a country man
Billy was his name
he pulled the carousel
from place to place
RJ T RJ GH
***
almost a child ...
behind closed hands
does anyone know more
new in town
we change sides
it bothers you
without asking our
Boredom
GH T GH RJ
It is interesting and exciting to read which inspirations and associations the beginning author follows and how the partner takes up his inspirations and completes the work into a whole.
Sancho Panza
takes the master down
his wing
The Last Resort
against wind power
Evening sun ...
two strange cats
on patrol
RJ T RJ GH
***
strange sounds
he casts a glance over
the border
last way out
that shimmer at night
a vulture
of his cactus
has found
GH T GH RJ
Finally, a few words about the cover of the little book based on an acrylic collage by Gabriele Hartmann. In shades of blue and beige, with hints of buildings that seem to blur, the viewer is drawn into a (desert) landscape that seems just as puzzling as the song from Hotel California, a bridge from the original to the textual cover versions .