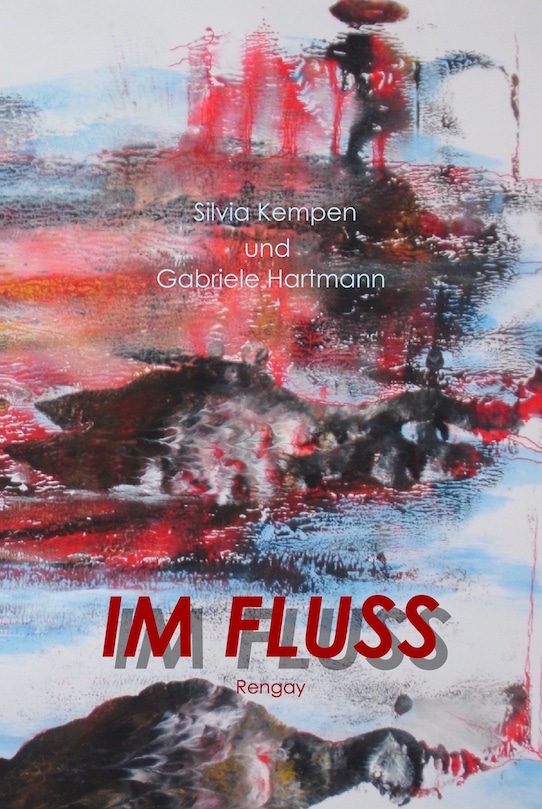 Before you even read a word, you are aflame. Inflamed for a small, lovingly designed booklet in A6 format. The cover, a watercolor in captivatingly flowing red, blue and gray tones - fire, water, air, earth - arouses curiosity about the inner dramaturgy: 20 Rengay on 20 pages.

Rengay, a genre that is not always easy for the reader to understand and understand, was developed based on the Japanese Renku poem by the American Gary Gay. Rengay consist of 6 alternating three or two line verses. If two authors write a Rengay together, each will alternate between writing two three-liners and one two-liners according to the scheme 3-2-3-3-2-3. The partners define a basic theme beforehand, but a rengay should not only take place on a selected level. By ascribing their words and ideas, further aspects, settings and topics (link), the authors enter new levels (shift) from verse to verse and thus broaden the horizon of their poetry, so to speak. Words with meaning must not be repeated. At the end, one line of the finished seal becomes the heading.

Silvia Kempen (SK) and Gabriele Hartmann (GH) master this technique masterfully. The development of the stories, their progressing from verse to verse, is sometimes breathtaking, as in the Rengay UND SCHWEBT. It starts very calmly and gently: goose cry / a feather hovers ... / and hovers (verse 1, SK). But already in the next verse, burgeoning drama can be felt when it says above the parchment / reflections (VERS 2, GH), which is then further consolidated in the first line of the third verse by means of vague (r) shadows, in a high-rising Rossini Concert (SK), which gives the tirelessly circling Pegasus… Schaum / vorm Maul (verse 4, GH) until at the end in the sixth verse the letter indicated at the beginning is vehemently withdrawn: his word? / he grabs the letter / again (verse 6, GH).

Or calmer in tone, but no less dramatically BONED. This rengay is about becoming and decaying, intrigue and a new beginning. Of course, melancholy should not be missing on the keyboard of moods. Quietly, as it suits her nature, she comes along aside.

The highlight of this booklet, however, is his journey through space, his journey to the most diverse planets and asteroids or planetoids in our solar system.

The exile from Zeus / Jupiter in the underworld greets as The Lord Of The Rings in the already mentioned ABSEITS DES WEGES.

In FORGED AND HAMMERED, the sun presents itself according to its place as the center of joie de vivre both in social (at Grandpa Day and the birthday party with friends) and in material terms with 24 carat gold and a trip to Venice. Not only many legends, fairy tales and myths tell of the moon. The Rengay IN SILVER also has a story about him, the trigger of cycles such as the tide and the regular cycle of women. And just as gold is the metal that is assigned to the sun, silver is that of the moon.

Two of my favorite Rengay in this book are those about Ceres and Vesta, even if these two are not "big" planets. They are among the minor planets or asteroids. The Rengay are already tied and mayflies are dedicated to them. The namesakes of these planetoids also play an important role in Roman mythology, since Ceres is the goddess of the earth and the harvest and Vesta the guardian of the fire.

But what does favorite Rengay mean here. Then there is THE STARRY SKY. This Rengay tells of Juno / Hera, who was outwitted by Jupiter / Zeus, who had taken the form of a cuckoo: from afar / Cuckoo calls (verse 2, GH) // through the forest / / looking for cloud cover / protection (vers 3, SK), was appointed protector of the family and marriage and gave the name to an asteroid. Or the four last Rengay, each progressing from verse to verse, devoting one of the four elements, adding a new aspect to each verse and leading to another setting. UNDERGROUND is about the earth, AND FLOATING about the air, NAVY BLUE about water and SMOKE SIGN about fire.

It is unbelievably good how Gabriele Hartmann and Silvia Kempen manage to combine astronomy, astrology, mythology, modern life and a bit of esotericism, building tension, driving stories and making the bow from the first to the last verse.

It would go beyond the scope to list every successful link, every surprising turn, every new idea on the respective chosen topic and to evaluate each Rengay in its individuality. Therefore, there is only the possibility to read for yourself and to follow the request in Rengay SOLUTIONS: IMAGE your opinion.

Live music
all around on ridges
blazing fire

in his hand
smoldering SMS

the two tongues
getting closer
at an acute angle

behind the pyramids
the sunrise