«To the library
«To overview of articles & articles

Knots in the head - double rengay and tan renga 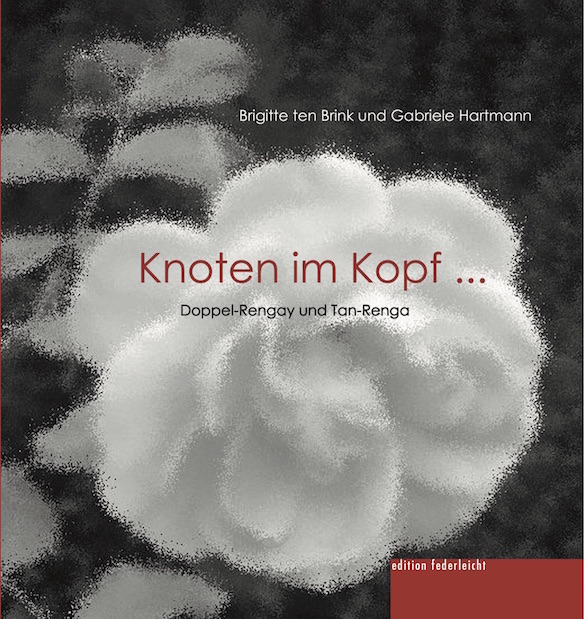 Two congenial authors have teamed up and published a sparkling masterpiece in the publishing house of the literarily ambitious and committed Karina Lotz: 14 double Rengay and 26 Tan Renga, one of which (on the back of the book) complements the 13 Tan Renga Haiga . Double Rengay are - as far as the regularium is concerned - anything but light fare. Readers take courage in the self-ironic warning of the introduction: "Please don't get dizzy when reading!" (P. 5).

Not slaves, but virtuosos of form take their own to heart

A wide country is suitable for both authors. This is where the literature lives: “Kinski's Book” (p. 7), Bernhard Schlink's “Reader” (p. 15), Aldous Huxley's “Brave New World” (p. 47). This is where the music lives, especially pop and rock: “Death Metal concert” (p. 13), “Wild Horses / Gino Vanellis / old number” (p. 37), “Paint It Black” by the Rolling Stones (p. 47 ), Bob Marley's "No Woman No Cry" (p. 55), and finally "You Want It Darker" by late Leonard Cohen (p. 56). This is where painting lives, especially Impressionism (“Monet's Water Lilies”), post-Impressionism and Pointillism (“how dabbed the park of Asnieres”) (p. 51). There comes astronomy ("Kepler-452b", p. 57) and - with a dazzling sense of the word - mathematics ("Mandelkern", p. 11). “Simply fairytale” (p. 51) a motif shimmers through again and again: “two flashing balls” (p. 39), “golden balls” (p. 51), “happiness / in a ball” (p. 43) . Anyone who recognizes the ideal form of the Platonic solids in the last quotation will also no longer be surprised by “Kant's imperative” (p. 41), the categorical one. The Scriptures of the Old and New Testaments become an ethical reference point when Jesus' word (John 8: 7) is negated and the first brother-killer of the Bible, Cain (Gen. 4, 8), becomes the prototype of modern man (p. 47). Associations learn to dance ("sunken", "Bermudas", p. 31), and poetic ambiguity celebrates happy primal origins ("with a jump / saved - grandfather / favorite cup", p. 31). The magical leap from midnight to midnight, which had already occupied Günter Eich's late "moles", becomes a topic - with a truly adequate phrase: "Equinox / he turns / the pancake" (p. 24). A motif that by the way appears again in the Tan Renga "the twelfth stroke" (p. 0).

As evidence of the great atmospheric density in the poetic cooperation, the lower half of "interchanged names" (p. 15) is quoted:

and darker
the knife under the bed
to the dream

In the Rengay "across borders" (p. 35; left part of the double Rengay that gave the book the title) the fascinating myth of the Minoan princess Ariadne is staged:

Knot in the head
the initial thread
undetectable

the firstborn
let's call her Ariadne

leave on the beach
the marriage promise fulfilled
ein anderer

Only the thread of Ariadne had enabled the Greek hero Theseus to get into and out of the proverbial labyrinth after the Minotaur monster was killed. Ariadne was not thanked for Theseus' saving idea. When you sit down, you “fulfill the marriage promise (...) another one”: Dionysos, the god of wine and intoxication. Such a motif is memorized, and one involuntarily reads it when it later says "hopelessly tangled / the thread" (p. 43).

The authors are also on the move in the Tan Renga to discover other, perhaps repressed, aspects of themselves:

old diary
I leaf through one
other lives

and can the nature of evil
no longer deny

In no way are they so busy with themselves that they miss' where it literally 'burns':

after all this years
the new edition

only the reader finishes it by reading and meditating. I notice that the second verse of Tan-Renga (Ageku, see p. 61) often shows this openness. And then the sympathy or aversion that this second verse awakens in me decides how I rate the whole scene. Two examples:

It can be fascinating as an idyll. And at the same time - because of the remoteness - put off.

the eingeschloss
in the labyrinth
the books

This can arouse the sympathy of the Taoist, who likes to see the slow, persistent forces of this world at work. Or I combine this constant filing with opportunism and streamlinedness. Both specifics of Far Eastern poetry echo in the Tan Renga: simplicity - and depth:

Spider threads
what separates us
what unites us

Dewdrop glitter
in the morning light

The co-authors have a lot of sensitivity, a lot of "wit" for language:

Maria's robe
how blue it was in
Reality?

"Appeal" is the basic gesture of opposition and protest. At the same time, the "vocation" as a reference and thus reinforcement of a tradition can prove to be an act of consistently affirmative character.

It is impressive for me how the two authors put the two together: the desire to escape time - and its inescapability. The impermanence and melancholy that it triggers already underpins Japanese poetry, which is the inspiration here:

Nice singing
if time is easy
would stand still…

from his hands
pours sand

The dictates of time between people lead to a major role reversal:

blond stubble field
oh, earlier ... you got me
the chin scratched

At best, together we can fight off transience. The magic word is solidarity:

diffuse words
Your hands
Can be found

“Diffuse words” stand for the dementia-related drying up of a successful verbal communication. What remains is the touch, the tenderness ("your hands / find each other") - without any power and possibility, unless that shared fainting. Daughter or son knows or believes to know where the "mother" is: in her "memories". In the absence of a viable language bridge, this can no longer be specified. Only one way leads daughter or son to the mother: allowing your own "sinking". A confession of powerlessness, certainly. More solidarity.