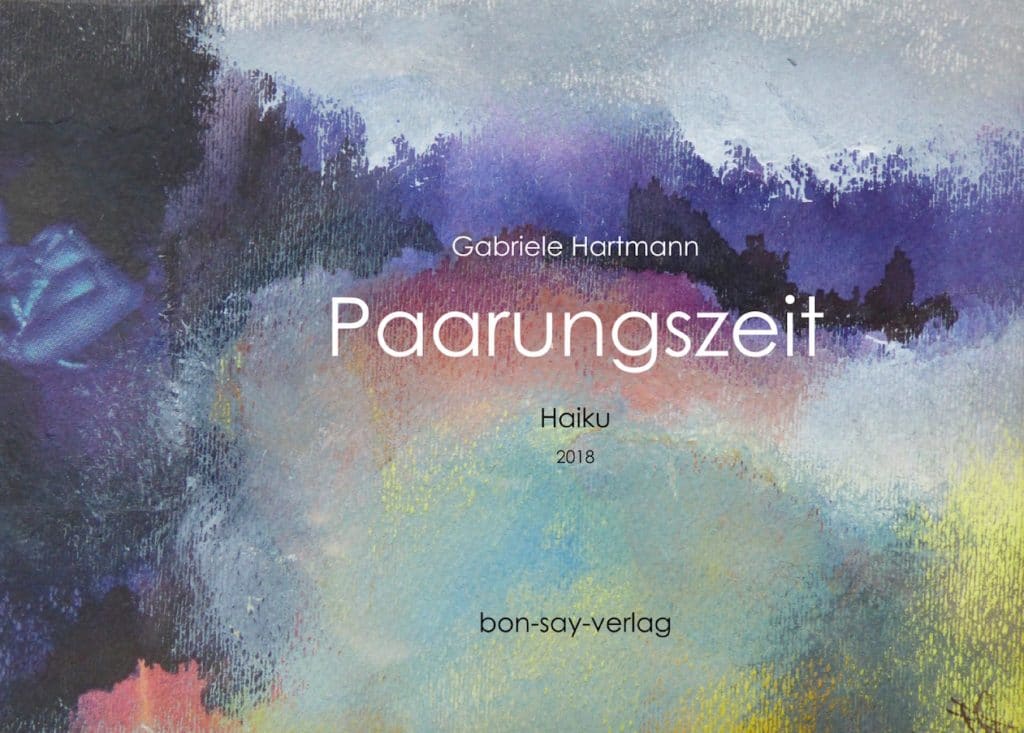 In a confined space, the haiku takes a sharp turn, building tension and leading to the contrasting:

Storm moon, an outer rough natural event of a larger kind turned into small, private, almost intimate ... the smoothing of a sheet. Is the sheet smoothed out for the sake of order? Or after a love night? A lot is possible, it is not arbitrary. So this haiku has a lot that makes a good haiku: a surprising twist, an exciting contrast, and even its brevity leaves space for the reader. A good haiku.

A review by Rüdiger Jung:

Always delighted to hold a new year of the Haiku Gabriele Hartmanns in hand. She masters her craft. It starts with the seasons:

winter Warmers
still chained the chairs
in the street cafe

A poem about us. We call them "winterlings" - those who dare to blossom while "in the street cafe" "the chairs" are "still chained". With Gabriele Hartmann, contemporary history also finds its way into haiku - simply and simply, and that is precisely why it is so sustainable:

The author does not provide any magic recipes nor does she pretend to have every answer as a poet:

what questions!
my candy changes
the cheek pocket

A compromising one? The answer seems too cool for that. No, I am thinking more of a child's astonishing and perturbing question. Be that as it may, the change of perspective helps with hard nuts. The candy can be a start. Ambivalence also in the following haiku:

Afraid of the storm? Or rather the focused look that cannot be put off? The narrow space of the haiku is enough for Gabriele Hartmann for expressive love poems that speak volumes:

three wishes
that they don't end
your kisses

With the fairy in the fairy tale you have three wishes. we know the cliff: to wish for the insignificant, not to get the most important thing. If, on the other hand, the first wish “sits”, you only need to press the repeat button twice.

In the middle of a world that perceives shrinking hearts, a growth that is not boldly claimed, but is confidently stated. Did you, dear reader, ever believe in the compatibility of "waiting and drinking tea" on the one hand and "crackling eroticism" on the other? Not as absurd as it sounds at first:

crackling rock candy
we leave our conversation
pull something else

As a pastor, I always come across the numerous religious connotations in the author's work:

I am also
one of the people
behind the fence

A text that is deeply suitable for me to enrich a passion devotion. In short, the Passion knows three groups of people: those to whom suffering is inflicted; those who inflict suffering; finally the audience. Of course, this is thought to be ideal: each of us shares in all three groups. The haiku is something of a confession. A person admits to remain as a spectator where his voice, his commitment would have been in demand. The Christmas texts are no less precise:

nativity play
the donkey has the text
vergessen

Haiku have no title, otherwise it could be obvious: "ideal cast". But be careful - things don't have to be that clear. Did the donkey just forget to say IAH - and is no longer a gray yes-man? Christmas is hustle and bustle - and hustle and bustle is not the real thing. Why Christmas may be looking for the last possible island:

before the festival
again
the silence

Religiously connotated also meets the limits of all short poems twice: the silence:

Everyday language is incommensurable to the mystical experience. Why the mystical language chooses the paradox. And suddenly can increase, “deepen” what cannot be increased - the silence. Trappists stand for the fact that avoiding all too often harmful words is beneficial. In contrast, another paradox:

Lent
he breaks
his silence

One who has been silent too often and in the wrong places has to break this silence. Then it can turn into nutritious bread.