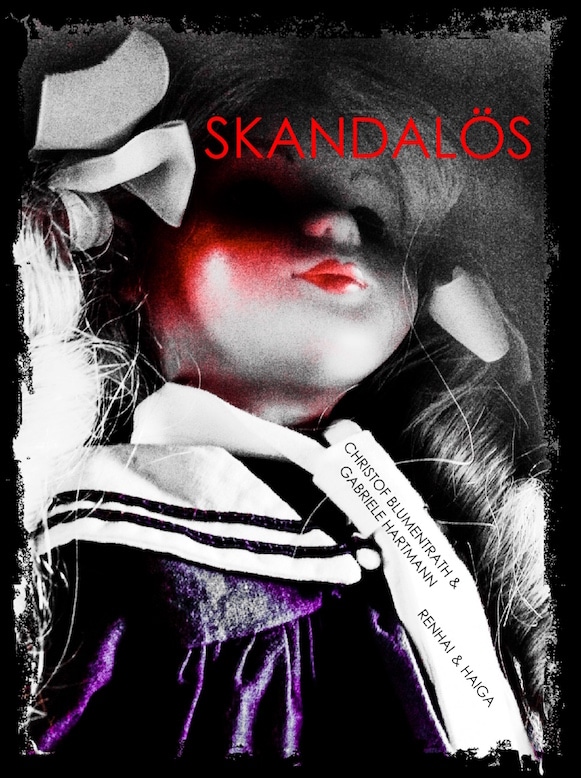 The number of forms of short and partner seals adapted from Japanese in the German-speaking region has long been legion. Renhai, one of the more recent achievements, has already practiced Gabriele Hartmann with various co-authors. The following construction plan and the following instructions for use are at the end of the latest volume:

RENHAI - a chain poem
As in Rengay, three and two line verses alternate with one another. In the Renhai, however, the two authors share the design of the middle verse. All verses are connected by link and shift, including the first and the last. Most of the time we find a season reference in the Renhai.

Now only the heading is missing, mostly a succinct line of poetry.

Of course, it is tempting to pursue or understand this tectonics in the individual verse. In the long run, it seems more appealing to me to read the poems as a unit; all the more if - as with Christof Blumentrath and Gabriele Hartmann - the co-authors act at eye level and harmonize perfectly.

There it leads the archaic “hero” (“a bird / at the side”) to the “destination” by means of a modern navigation instrument. (P. 13, IN THOUGHTS). The “wolf”, as the true archetype of every possible threat, corresponds to an endangered “home alone”. (P. 14, BEHIND THE FACADE). There begins with chess tactics, which ends with a Christianized Antigone as a martyr (p. 22, THIRD SINGING). There it marks - in order to stay at chess - a PEASANT VICTIM (p. 37) who "wears" nothing but his skin "that the" withdrawal "of this figure is not at all an option. THE SHARED VIEW (p. 38) seems to be the other end of a child's trauma. If "steps" "castanets" "with deaf ears" "follow", the title (A RED PROMISE, p. 45) reminds of the color-blind bull, which in the bullfighting arena at most reacts to the movement of the cloth. BROKEN LIGHT (p. 48) seems to start at Chagall to end in the Carthusian monastery. The emotionality of saying goodbye, being left, staying back rules elsewhere down to the title (DREH DICH NECHMAL UM, p. 62). In the final text, anyone who surrenders to the skin and hair of art risks the odium of madness: to be occupied. (P. 64, THE LAST BRUSHSTROKE).

in the footsteps of children
colorized the bare branches

exchange a look
Beyond the horizon
first light

with an outstretched hand
over the threshold

Fresh breeze
between night and day
Scent of jasmine