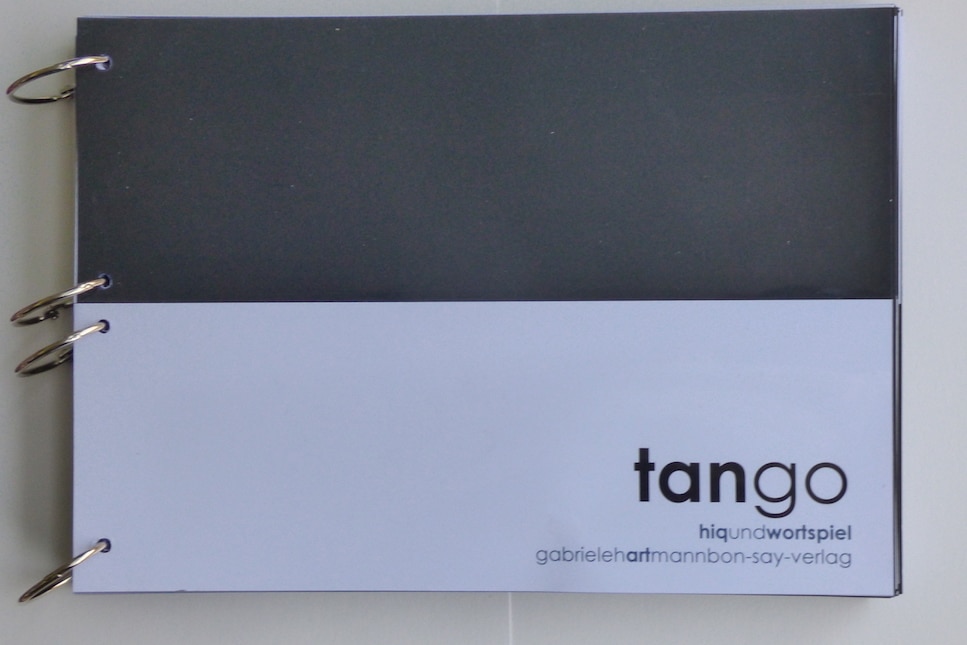 … Returning, where I had filled up with light, air and sun for a few days, your show surprises me with the literary delights. I have to say, I am impressed with the energy and creativity with which you have lived out your literary talent. In particular, the heavyweight “tango - hiqundwortspiel” touches me, into which I immediately plunged and enjoyed the many forms and topics.

It can make you almost dizzy. So far I did not know this form of monosyllabic, written "verses", their contents, which are not always immediately recognizable, give the whole thing an - as I can say - almost enigmatic painting. So far, I only knew single-line “haiku” from the work of Taneda Santôka…

and a review by Rüdiger Jung

A bibliophile volume - but not only because of that, a feast for the synapses! It welcomes us on the front page:

and says goodbye with the more detailed imprint on p. 98:

Of course, the (refuted!) Ontological proof of God by Anselm from Canterbury resounds. But also the ancient Thaumazein, the amazement as the basis of any philosophy. As it were in psalm key, the following:

“Japanese mono no aware” is the keyword for the fact that beauty is cheaper than the price of impermanence. Unfortunately, human beings are in the process of extremely accelerating the transience of creation. Anthropocene is the term used to describe the earth age, which was shaped by humans (quite destructively). Gabriele Hartmann finds a compelling poetic formula for this:

Close your eyes and by no means is the magic formula - no matter how otherwise the Triassic see nothing, hear nothing, say nothing:

three monkeys all sense of being (p. 48)

Even if the narrow dance is accompanied by a minimalism of linguistic means, the explosive power is suitable for swirling different worldviews - for example western teleology and the cyclical east:

Fairy tales can be fairytale - think of the "fairy tales"! In contrast to the trolls, the elves stand for lightness and swing. And of course the word games as a sign of homosexuality cannot be ignored. Nevertheless, I would like to take the elves equally as a reference to the number. It is not for nothing that the carnival begins at the eleventh eleventh at eleven o'clock. The elf is a metaphysical number. The twelve, the three times four of God and the world, stands biblically for perfection (examples: the 12 tribes of Israel, the 12 disciples of Jesus). One thing less, the eleven (the disciples after the loss of Judas) 'stand for the opposite: the imperfection and the questioning of all certainties. So no elf dance without a moment of foolishness! In fact, in the elven dance words are read against the grain, which of course always reveals deeper layers.

is by no means a manifesto of nihilism. Rather baroque complaint (and warning) from Vanitas. The vanity of the three majuscules stands before the eyes: the person who sets himself apart from his surroundings, his living space and, at worst, destroys both. A me in haiku? why not - if it doesn't forget what its life is based on! The warning has a specifically Christian variant:

Humility is the attitude that God gives in Jesus Christ. In the spirit of John the Baptist: "He has to grow, but I have to lose weight" (John 3:30). Sometimes a turn in the order of the letters is enough to make a whole theory sensible - and on top of that to transform it into art:

We usually come across “standstill” as a problem indicator, “ill” as an English word reinforces this impression. Gabriele Hartmann brushes the words against the grain with elven ease, and I know that "standing still" is neither "sick" nor "crazy"! Breaks (also creative!) Can be as vital as the elf dance as an alternative to the tight dance!