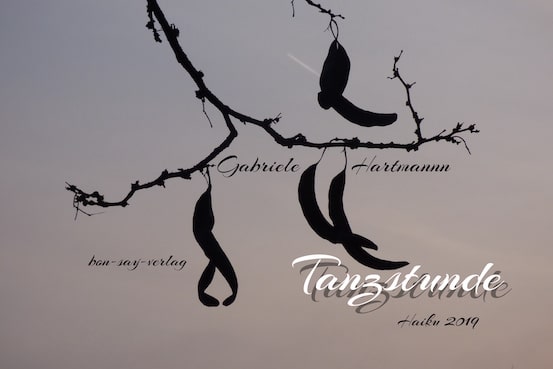 2020 in the bon say publishing house

Haiku 2019 by Gabriele Hartmann - according to the respective publication with translation.

"Tanzstunde" is a very nice title for the 125 haiku that Gabriele Hartmann published in 2019. It is characterized by the lightness that is constitutive for the genre of poetry. Once again, the strength and unconditionality of sensory perception are convincing:

At the same time, a seemingly technical mishap hints at the fragile, vulnerable - the acute moment reads equally as satori and memento mori:

tension
the canvas is purring
together (p. 79)

The subtle, nuanced, ambivalent is Gabriele Hartmann's strength. The reader communicates crystalline moments on a journey through life that are not easy to understand, to interpret, to check off.

As much as the smug association of "Schlagobers" may play out at the end, this is about nothing less than a hierarchy and sovereignty of interpretation ("topmost", also a military connotation) that remains inviolable posthumously.

Daffodils
it will close soon
the portal (p. 35)

The heavy "portal" lets the first association of daffodils - the flowering one - take a back seat. An imposing church building arises in the mind's eye - cathedral, cathedral, cathedral. Two encounters run contrary. For the one who is opening, the whole Easter resurrection theme stands next to the narcissus. The closing portal marks the beginning of the highly festive service, but also a world that threatens to remain outside. Both contrary movements give the impression of a "kairos", a time of salvation, an unrepeatable opportunity that - according to the eschatological parables of Jesus - could also be missed or missed. Isn't it just as powerful as multi-layered lyrical concentrates like the Haiku Gabriele Hartmanns that are suitable to create a new influx of a cultural technique that is as fundamental as it is endangered?

Yes, I can hear the skeptic in me: nice weather - and the spook is over. On the other hand, I hold up the flag of hope. Especially those who have an umbrella would not necessarily have to rely on the "reading room" as a mere alternative area!

at the crossroads
I don't know anything
from him (p. 49)

A haiku that leads to the contradiction - and that is how it captivates the reader. Yes, it's true: the name and dates of a crossroads tell me almost nothing about the person who was killed here in a traffic accident. No, it is not true: the name and dates stand for the fact that a person like me (and the name evokes all the social connections in which he could have been standing) lost his life in tragic circumstances and died.

Great castling
one of the players blows up
his chains (p. 93)

The "Great Castling" in the regular chess game should be the greatest possible interference in the position of his figures. Certainly a unique and only possible once. If you play like this, you bet on an “all or nothing!” Game does not always have to please:

Barrel organ game
deep in our pockets
the hands (p. 78)

In the truest sense of the word, an economical gesture that does not necessarily suggest that the coins will fall into the hat in rows. On the other hand: if you stop, listen, it is not entirely indifferent, maybe in the end you can still make a donation ... The last haiku that I want to look at is late in the year - and absolutely fascinating:

More contradictory word fields are hardly conceivable than "Christmas Eve" and "ceasefire". One might think of reports from the First World War, of enemies who left their weapons behind for Christmas, yes, set signs of peace (which probably did not survive the festival). But to me the haiku seems a lot closer to the present, maybe a lot more private. Doesn't almost every family have the unwritten law to let conflicts (which exist in the best family) rest? It is possible that someone will give out because it seems too forced and lying to him. I also favor another reading: Jesus who “breaks the ceasefire” because it is about more than that - about peace, about the fundamental yes to people who are (should and should be) different from me.