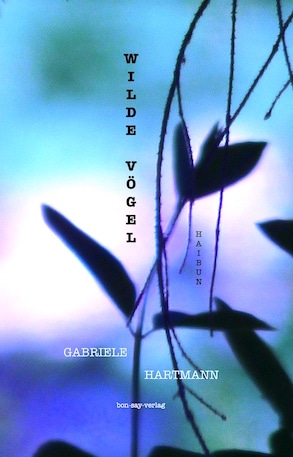 2018 in the bon say publishing house

The band unites 55 Haibun. For 10 of these, on 79 first publications in "summer grass", "chrysanthemum" and "lotus blossom" from 2014 to 2017 are documented; the longest text - the final one - was awarded in a competition. The range of content is great, but so is the formal diversity: from “haiku with a minimal verbal parachute” (if I may characterize the smallest units) to the narrative context, which takes up 6 pages; from units that do completely without a haiku to the final text with his impressive love of love in 4 haiku 'underneath

Milan Kundera's epoch-making romantic title is used to name what the Germans are particularly fond of and prefer to stay: Soccer world champions:

Gabriele Hartmann has an enormous potential for linguistic-stylistic possibilities, which can be illustrated by a single text ("WEG", p. 46): The title remains dazzling - after upper or lower case, after a long or short vowel. A word becomes - change of meaning! - Shortened syllable by syllable ("incapable", "incapable", "capable"). The palindrome "LEBEN - NEBEL", popular in German baroque poetry (which already knew the joy of experiment!), Is used. Finally, the reverberation known and popular in haiku serves to answer the question about the meaning of life in a shortening echo: "LIFE" - "Even"! It remains to be noted that the text on the opposite page 47 amounts to the same haiku with a completely different history!

It is a serious and precise as well as playful and lucid use of language that characterizes this volume and reminds me of Ingeborg Bachmann at one point: The author carefully intertwines her own experience with quotes from "Hotel California" by the Eagles (HOTEL C., P. 11). The apparently so euphoric and emphatic triple “open” at the end remains quite ambivalent if you still have Don Henley's voice in your ear (“You can check in any time you like –but you can never leave!”)

Also fascinating is “FIRST OR THE SEA OF REST” (p. 12; the latter denotes a specific region of the moon). An illustrated magazine (“An old star”) brings together two namesakes, which the Haibun only names with the initial of the last name (“A.”): the astronaut Neil and the cyclist (and doping offender) Lance Armstrong. If you like, two completely different paths (that of the first man who entered the moon and that of the punished super sportsman who had been stripped of his victory trophies), which culminate in the same haiku that also plays with both names:

Estuary delta
the once so strong arm
dried up (p. 12)

The subject of “dementia”, one of the most threatening for both individuals and society, is often encountered in the Haibun. With a flash of hope most likely in "MATHILDE" (p. 25), where the ego does not tear the title character out of captivity in a final religious phrase ("Marching, in the hour of death"), but this in the quotation can subvert empathetically until even Mathilde says her verse "smiling".

Impressively, “THE JUDGMENT” (p. 28), where the little girl's ego is fatally conditioned by associating the grandmother's death with the fact that she was the last person to be assigned the cutlery. Nobody should now be the last and consequently must die; the mere necessity of eating and the cutlery required establish transience and mortality as the basic constant of human existence.

Are you more likely to associate the "RABEN" (p. 37) with the "Raven Nevermore" Edgar Allan Poes or Günter Eich's friendly "Sabeth"? I tend towards the latter. What are these supposed to be birds of death and unfortunate birds (this context is clearly connoted!) That have “button eyes”? The cited near-death experience of being-out-of-body (view from the ceiling) underlines the existential seriousness of the ravens, who are sisters to the vultures as scavengers. Nevertheless, it is less the Kafkaesque horror than the surreal iridescence that is not entirely free of an ironic note.

“DAS STUMME H” (p. 63) drives the macabre gallows humor to its bureaucratic tip: “Silvys” “Pension did not come”, and when asked by the responsible authority, it has to be said: “They died”, and all of that two years. But there is the form to be filled in personally to register for retirement and therefore life on time. In the constant copying of this form, Silvy discovers a very own, personal reading of "eternal life". The “silent H”, caused by excitement, no longer owes itself to horror, but to the joy of life claimed against all bureaucracy.

The text “DREIZEHN” on the opposite page speaks of what these children were most brutally brought to, of growing up. The whole ambivalence of puberty finds room in an impressive haiku:

At the end of my review, I return to the beginning of the book, more precisely: to the second shark bun "PROMISES", which leads us to the "Holzmichel" in September in Bad Bergzabern and makes ear witnesses to an unsightly dialogue of almost metaphysical scope:

Two are sitting near the door in front of empty jugs.
Teufel: "She's feeling better again."
Death: "Wait and see."
We pay and leave. (P. 6)

Certainly not the worst: leaving the two questionable gentlemen to their own devices!