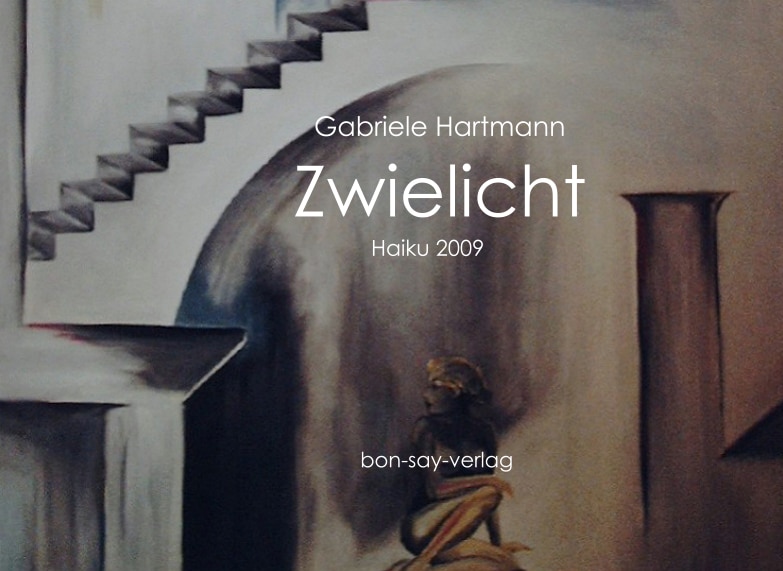 Spiral stitching, DIN A 6, a cover photo as front and back, each haiku has its own page that it can breathe and work - this is how Gabriele Hartmann's book publication appears on the outside. A first part (without its own title) comprises 33 haiku, four each preceded by an English equivalent. The second part, "feature", contains twenty haiku - first the English, then the German version. A final list of the “Publications 2009” enables the interest that the volume arouses to be pursued. Not artificial, but completely natural and convincing touches the reader the synesthesia of the opening verse

Dim light
emerges from the moon
a bird song

In one verse, Gabriele Hartmann evokes times in which space travel seemed to be inherent in the supposed innocence of human discovery - and not yet the strategic calculation of the superpowers:

the streets swept empty
The Eagle has landed

A visual artist is at work in this haiku; an extremely trained and refined sense of the essential lines and contours becomes visible - in snapshots of extreme accuracy and evocative power:

with her lips
Mother sharpens the thread
Lamp light

Winter light
on the beach
the backs of the boats

The still life finally quoted is - without a single word being able to or should not signal this - filled with the trips of the past and the coming summer.

Farewell, a mood, an atmosphere, a fluidity - something of floating lightness that cannot be held and still remains - as an indelible reverberation:

Twilight, dusk, twilight as twilight, but also as semi-darkness are the basic words of the book. The fascination of the transitions is clear; it should come as no surprise that one of the borders that we insure ourselves again and again - namely those of dreams and wakes - becomes fluid in a fairytale and equally suggestive way:

A haiku of the first part,

dancing dust
someone calls
my name

encountered again in the second ("feature") - albeit in a changed line break and thus signaling how minimal nuances change such a tiny poem:

whirling dust
someone
calls my name

dancing dust
someone
give my name

A moment of the Unio mystica (you can almost feel the rising in the "dancing dust") breaks with the present, which (a wake-up call? Relentlessly?) Calls back into the individuation.

The classic paradox of haiku, to say silence, to make silence audible, to experience it, is encountered in an art that is sister to writing, music:

I would like to conclude my consideration with the title poem:

twilight
he arranges the figures
and waits

twilight
he sets up the figures
and wait

A new genesis, as suggested by "the first word" in one of the previous haiku or the almost immediately adjacent text "darkness" / "darkness", alluding to the biblical primal chaos? The preparation of a chess or puppet game? The work of a prop on stage? Every possible interpretation turns into a short film. What remains nonetheless is

on the table
an unsolved puzzle

When Hubertus Thum's excellent "Sparrow Project" stopped appearing, the last word (at least in haiku form) belonged to Gabriele Hartmann (then still Reinhard) - a well-deserved appreciation! The Westerwald woman combines - one of the classics of haiku, Buson, comparable - the gifts of concentrated poem and visual art. This double talent owes the great visual power of her verses "which - stylistically confident and precisely set - also convince in sound. They invite you to pause for a moment:

moonlight
the empty chair has stopped
to rock

Whoever surrenders to the Haiku Gabriele Hartmanns can't help but keep an eye out for a moment:

potholes
full to the brim
with heaven

The atmosphere, the mood of a moment in the seasons communicates to the reader - in great density and intensity:

We meet the protagonist again later:

Midnight rain
a street dog
drink from the moon

Incidentally, I do not read the "street dog" disproportionately: the dog does something presumptuous - and it does so successfully! This is how he approaches the human being in an almost dangerous way ... Life gives sound to Gabriele Hartmann's haiku - and thus moves on the background slide of silence:

A verse that also fascinates me because it impressively demonstrates the moment of polarity that Wilhelm von Bodmershof spoke of in his “Study on Haiku”.

Basho's demand that the shark poet have to become a child again corresponds - as in the following example - a playfulness that refreshes the heart and senses:

The artist's typography supports the poet's statement with the seemingly endless line of the little bird song and then the remarkably tiny line for the big moon.

In general: the most amazing and lasting impressions that Haiku Gabriele Hartmanns convey to the reader are due to heaven - regardless of whether that of the night or - as follows - that of the day:

Lunchtime
into the window of the neighbor
the sky tilts

A "sky" that is reflected in the window glass in real life and at the same time belongs to another dimension ("midday ringing"). The high midday, as it were the safest area of ​​everyday life, becomes transparent for something that the senses alone cannot grasp; the extremely sustainable way of speaking about the "sky" that "tilts" has something apocalyptic in the full (double) sense of the word.

A motive that should not go unmentioned is the empathy and sensitivity of Gabriele Hartmann for the people next to her:

The fact that it remains empty makes it so difficult - not people, the sky, not coins, the rain, not comfort, suffering is its abundance. This unprecedented poverty has to be content with just two lines in the midst of noisy three-liners.

No one perceives that if they haven't already been thrown back on themselves:

Late news
on the answering machine
my voice

The "messages" are no longer a bridge to the world, but part of an involuntary, inescapable soliloquy; a human interlocutor is missing, and the technical person has - soberly stated - "my voice". The sobriety of the poem - without loyality, very unpretentious - corresponds to a loneliness that has become technically measurable. It is the first syllable, the threatening "late", that reverberates in the end. The seventeenth syllable is silence, one that calls for a response, for an answer that carries something other than “my voice”.