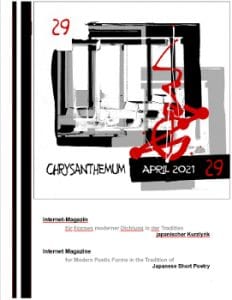 The spring gift, Chrysanthemum No. 29, the internet magazine for forms of modern poetry in the tradition of Japanese short poetry, is now online. In addition to haiku, senryû, tanka, haiga, photo haiku, tanka pictures, haibun and tanka prose, there are the following

Mark Miller: Light and Counterlight. [Light and back light. A haiku collection.]

Naomi Wakan: Wind on the Heath [Wind on the heather]. New and selected
density.

Chrysanthemum appears on April 15th and October 15th. The closing date for the spring edition is the end of February, for the autumn edition the end of August. Contributions can, however, be submitted at any time.
Posts to Beate Conrad: haiku.chrysanthemum [@] gmail.com

www.ahaiga.ch The new edition of ahaiga has been online since April 06.04.2021th, XNUMX. Authors are invited for the new one

Under the title Anna-Göldi-Auditorium, at least four events are planned annually, which highlight socially relevant topics. in the

with many interesting articles about Haiku & Co has appeared. A little taste of the

Haiku competition for the 2022 haiku holder

As has been the case for 10 years now, haiku are sought for publication in a competition