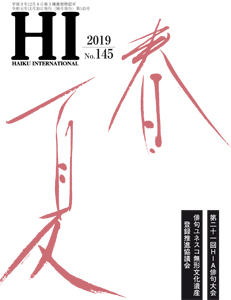 Selected and provided with comments by Emiko Miyashita

The haiku is about a celebration of the new era (REIWA, May 1, 2019) and represents the raindrops that fall one after the other in the season of fresh green leaves as prayer for the new era. It rained on the day of the enthronement it.

The smell of fresh tea
one last round drop
glitters valuable

Newly harvested green tea will be launched in May. Traditionally, fresh tea leaves are picked on the 88th day, starting on February 4 (the first day of spring), i.e. around May 3. It is valuable because of its fragrance, but not only because we believe that the new green tea picked on the 88th day will make us live longer. Here in this haiku, the author brewed her tea in a teapot and enjoyed the fragrance. The last drop from the teapot takes the form of a gem (or ball). It shows how much she appreciates the moment when she has made her first cup of tea from the fresh green tea.

The fan in hand
He walks with me
My mother's scent

The author carries a fan (kigo for the summer). She smells her mother's favorite scent on it. Maybe the fan is made of sandalwood? Or maybe it's scented in some way. The verb 聞 くkiku means "listen" and this verb is used in our culture especially for the smell of precious fragrant wood. I can imagine a mature woman in her summer kimono and maybe the (deceased) mother left her the fan and brings back all the happy memories of the time she spent with her mother.

Shoulder to shoulder
try mother and child
to catch a goldfish

A mother and child trying to catch a goldfish at a fair with their shoulders bumping into each other. The way they move the fine mesh is very similar. The goldfish is a summerkigo, and the fair takes place at a shrine, it is a festival.

Someone in a summer uniform runs along a beach and competes with the surfers on the waves. We don't know what kind of summer uniform it is, but it's probably a white school uniform. I suspect that it represents a certain moment in adolescence.

People are getting old, and as they get older, they may move to nursing homes and leave their homes empty. Or maybe they went to heaven! In these empty houses, the medlar trees bear fruit and ripen in the garden.

Under the eaves
the wind is making its way
beautiful hydrangea

A simple description of a draft of wind under the eaves in combination with hydrangeas.

The author suffers from the heat and has lost his appetite and lost the desire to talk. He stares at his poem 'Suffer from the Summer Heat', which ends with 'Mouth', which neither eats nor speaks. The author's exhaustion is well incorporated into the poem. The heat in Tokyo is deadly these days!

The duckweed
unconscious of their condition
floating in the water

It is an observation of the duckweed. The author explains that they have forgotten or are not aware that they are floating. The clear affirmation makes this haiku very haiku-like.

Tropical fish
their dances so lively
lonely in the evening

Although the colorful tropical fish dance / swim in an aquarium (it is fashionable to keep a small aquarium in your own house as a room decoration), the author is alone and it is night! The author says nothing, but we feel that she is missing someone.

www.ahaiga.ch The new edition of ahaiga goes online on April 07.07.2020th, XNUMX. Authors are invited for the new quarter

Dear DHG members and haiku friends, Who has not yet received a haiku / tanka for the upcoming haiku and tanka selection (for

Entries for the new Haiku 30 calendar could be submitted until June 2021. Now the