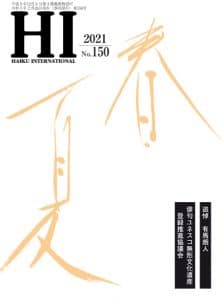 high moon. . .
changes from day to day
my work

Since he does not have a steady job, the author is forced to lead an unstable life. He returns home late at night. The moon is already high in the sky and illuminates the lonely figure. Tsukitenshin (high moon) reminds me of Buson's “A high moon goes through the poor city”. Both haiku are lonely / unhappy, but the haiku here is sad in view of today's unequal society and so you can feel the loneliness of today's city dwellers.

Exhaustion in summer -
a movement of the wrist
winds the clock

The summer in Japan is hot, humid and long, also called “100-day summer”, and is the background of the seasonal word “summer fatigue” or “summer thinness”. It must be even hotter in Canada due to global warming. The author shakes the watch vigorously to cheer himself up. It is more to himself than to the watch. The season word is easy to recognize and is well represented with this little plot.

sultry night. . .
from the densely packed cosmos
a star falls out

In the city we hardly see the stars because of the street lamps. But in the darkness of the mountains or near the sea we see that the stars are dense, almost as if they were making a creaking sound. On a “tropical night” the stars well up out of a crowded universe. The earth is overcrowded and so the cosmos is also overcrowded and something oozes out - it is an ambiguous sentence.

on the goldfish farm
standing wind
the water smells

Iguanas are lizard reptiles, many of which are covered with spiky scales. The surface of the bitter melon is also wart-like. It is said that the feeling of grasping a bitter melon is similar to the feeling of grasping an iguana. The iguana is an animal and the bitter gourd is a plant, but both have spines and warts for self-protection. You would hesitate a moment before touching it.

I don't know any wars, but
i'm afraid it's war
this spring

only one way
to enter the village
dense bracken

if it is not rotated
the globe * becomes unusable ...
dust-dry planet **

*Globe on a desk

**Usually the starry sky gives a feeling of coolness on summer nights, but in times of drought the air becomes dusty and the stars are no longer clearly visible at night, perhaps only the brightest stars can be seen. It's a summer kigo.

www.ahaiga.ch The new edition of ahaiga has been online since April 05.10.2021th, XNUMX. Authors are invited for the new one

The jury reached over 1500 haiku on the occasion of the competition for inclusion in the haiku calendar 2022.

with many interesting articles about Haiku & Co has appeared. A little taste of the