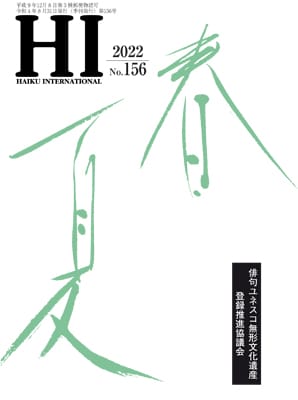 One says basho saw
on the pine this year's
green cones

Is it the pine tree of Takekuma in Iwanuma City, Miyagi Prefecture? Also known as Futaki Pine, it is considered the most quoted pine in poetry in Mutsu District. The current pine tree is probably the one that has been planted over the generations, but the scenery must be the same that Basho had seen. The author found a new cone on this famous pine tree. It's like observing Basho's haikai philosophy of “fueki ryūkō” – the jaw doesn't change, but a new cone is born.

yukitsuri no / nawa no gen hiku / kaze no fu kana

Yukitsuri is known as a tradition of Kenrokuen Garden in Kanazawa. Especially in the snowy land, the pillars support the tree trunks and the branches are hung in all directions to balance the weight of the snow. The graceful cones form a geometric beauty against the deep blue winter sky. When the wind blows it is as if the strings of a large harp are being played and the sound of the harp can be heard from somewhere.

wireless earphones
fall with a pop
the snow is deep

It is said that haiku should be based on everyday experience or what one likes. This haiku was also created while listening to the author's favorite music during a usual walk. Recently, wireless earphones that are worn directly on the ear have become very popular and allow people to listen to music casually. While walking down a snowy street, the wireless headphones fell out of her ear, but luckily she was able to pick them up out of the snow.

winter darkness
electrical light all day
else gray in gray

The country ends
and the sea begins —
daffodil

The narcissus blooms in the cold season, unlike other flowers, and endures the cold. This creates a clear picture. Wild daffodils growing on the cliffs by the Sea of ​​Japan on the coast of Echizen in Fukui Prefecture are well known. The expression “the earth ends and the sea begins” suggests that the sea is approaching the cliff.

Bubble
flow over out the window
a science room

where you go
the refugees*?
spring snow

On Tuesday d. 6 December at 19 p.m., the Hamburg Authors' Association invites you to a reading of

The jury made a selection from over 2000 submissions, which included impressive and sometimes surprising

www.ahaiga.ch The new edition of ahaiga has been online since April 04.10.2022th, XNUMX. Authors are invited for the new one

Invitation to the Zoom seminar with Prof. Makoto Aoki Topic “About the Haiku and the 'Yohaku'* in the