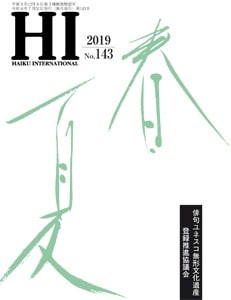 The "rainy season" (tsuyu 梅雨), which is noticeable in Japan in June and July due to heavy and long-lasting rainfall, is considered a classic season word for summer in Haiku. She not only lays on the mood of the people, but also represents a physical strain due to the high humidity. The author of the poem shifts the attention in the present haiku to an interesting observation: somehow her cat seems to feel harder during the rainy season than otherwise. It is up to the reader to interpret whether this is due to the soaked fur of the cat that has just come in from the outside, or rather to the own fatigue caused by the constant rain.

Staring into the rain sky
he gets respect,
the devil from the ridge

This poem is also dedicated to the rainy season. However, the focus here is not on a pet, but on a traditional element of Japanese architecture. As onigawara 鬼 瓦 are roof tiles that have a devil's face and are located at the ends of a ridge. In the past, they were mainly used to ward off evil spirits, nowadays they are rarely used. These special roof tiles are said to have their origin in Medusa heads, which can be found at ancient temple complexes in Europe and on the Arabian Peninsula. They first came to China via the Silk Road before entering Japanese architecture in the Nara period (710–794).

Travel impressions are a frequently chosen subject in haiku. In recent times, experiences from abroad have also been described more and more often. These immediately prove that traditionalists are not necessarily right if they insist on a connection to nature that can only be experienced in Japan. Finally, even seasonal words are transferred to the foreign environment. In this poem it is the "night when you can see the moon well" (ryōya 良夜, literally "good night"), which fulfills this function as a season word for autumn. This means in particular the night from the 15th to the 16th day of the 8th month according to the old lunar calendar, in which the "autumn full moon" (Meigetsu 名 月) can observe. The evening in the opera described by the author of the poem appears to be embellished by the clear moonlit night and forms a successful conclusion to his trip to Europe.

Even though this may not necessarily apply to Japanese buildings, our modern homes have noticeably reduced our fear of winter. Building insulation and heating ensure that we are comfortably warm even in cold outside temperatures. The author of this poem becomes aware of this fact when he goes into a hut in the mountains. The cold can still be clearly felt there. If you want, the poem also lets the reader pause briefly and think about how things might go for people who have no roof over their heads during the cold season. The astonishment at the violence of nature, behind which man inevitably lags behind, forms the center of this haiku.

A white mountain hare:
blinked once,
he disappeared

There are real snow hares on Hokkaidō, the northernmost of the Japanese islands, but this poem is included yukiusagi 雪 兎 probably meant an image made of snow. These palm-sized hemispheres, which are given green ears from the leaves of the mock laurel bush and red eyes from the fruits of the sky bamboo, can be used as a small-format equivalent of the snowmen that are popular in this country, that in Japanese Yukidaruma 達磨 達磨 means to be considered. Due to their small size, it of course does not take very long before these structures melt through the sun and thus "run away" (hashirisaru 走 り 去 る) are. In the haiku above, the mountain hare acts as a classic seasonal word for winter.

After opening the curtains
in the window
a snowy landscape

Who does not know this situation: In winter you look out of the window in the morning and suddenly realize that it snowed overnight. The present haiku tries to formally capture this element of surprise by waiting for the last segment of the verse before the picture drawn reveals itself. So it is not so much the content, but rather the design that gives the poem that certain something. The "snow landscape" (yukigeshiki 雪 景色) itself is the word of the season for the poem and may arouse associations with the novel “Schneeland” for one or the other interested in literature (Yukiguni 雪 国, 1935–37) by the Japanese Nobel Laureate in Literature Kawabata Yasunari (1899–1972).

Christmas -
it will end soon,
the faculty meeting?

For the German reader, it may at first seem a little strange that the author of this haiku speaks of working on Christmas. In fact, December 25th is not a public holiday in Japan, after all, Christianity is hardly widespread there. However, the custom has established itself among the young generation of celebrating a special "Christmas date" with his partner at Christmas (kurisumasu dēto ク リ ス マ ス デ ー ト). The text does not indicate whether the author of the poem herself attended the faculty meeting and longed for its end, or whether her partner did overtime at the university. However, the faculty meeting definitely seems to stand in the way of evening planning.

From retirement
recalled,
I shovel snow

This poem lives primarily from its humorous undertone. The author, who during his "evening of life" (Yosei 余生) no more real obligations seem to have to be met, is given a new task by the fallen snow and is literally "called back" to life (yobimodosarete 呼 び 戻 さ れ て). A certain amount of joy and a certain pride are expressed in the text, since it can finally be useful again in this way. The prefectura Akita, in the northwest of the main island of Honshu, from which the author comes, is known for the heavy snowfall in winter and belongs to the snowy regions of Japan.

New Year -
deep are the traces of life
in my reflection

The translation of this haiku uses a few tricks, so that in the end it deviates quite clearly from the original. First of all, you will find the word of the season in the last segment in the original text hatsukagami 初 鏡, which in Japanese consists of exactly five moors. In terms of content, we refer to the "first look in the mirror in the new year". Since this transfer of content in German is too long for a haiku, the time frame in the translation was - not entirely correctly - set exactly for New Year. Another difference is two semantic shifts. So is with jibunshi 自 分 史 actually meant the "own life story" and the word shiwa 皺 could also be translated more specifically with "folds". Unfortunately, Haiku translations from Japanese often cannot do without such small cheats because of the brevity to be observed and the necessary transfer of the seasonal words.

You left us -
the cold days
don't want to end

This haiku is given the prevailing traditional orientation of Haiku International  unusually personal. The author describes the painful farewell of someone close to him. The lyrical context suggests that it is kimi 君 (literally "you") contrary to the colloquial use is about your own life partner and not just a close friend. Since the loved one left, the days have stayed cold and do not get warmer. Your own emotions are objectively described based on nature and carried out through the poem.

This poem can only really take effect if you take a close look at the word of the season. Haru asashi 春 浅 し refers to the first days of spring in Japanese, which can be recognized as such on the calendar, but do not feel as such due to the persistent cold. The wait for the noticeable beginning of spring overlaps with the wait for the washing machine. After all, it is this combination that gives this haiku a special kind of monotonous sound that is also transmitted to the reader. The verse is almost irrelevant and certainly faces the risk of being overlooked. This is only prevented by the "coin-operated washing machine" (koinrandorī コ イ ン ラ ン ド リ ー), which stands out in the middle part of the verse in the original both thematically and optically due to the katakana spelling.

The swallow is also a migratory bird in Japan. In traditional haiku, this fact is taken into account by adding a season word for the "returning swallows" (tsubame dry 燕 来 る) in spring and a word of the season for the swallows returning to the south (tsubame kaeru 燕 帰 る) exists in autumn. In addition, classic seasonal dictionaries have more than 20 other names for the different habits of swallows during the different seasons. In the poem above, the return of the swallows overlaps with the opening of a bakery that has been renovated. So it is not only the curious people who want to take a look at the new shop, but also the swallows who hope for some bread crumbs.

Deserted -
on the remains of the provincial temple
grow violets

This poem thematically reminds a little of the famous summer grass haiku from Bashō (1644–1694), to which the quarterly publication of the German Haiku Society owes its name. Although it is not the remnants of soldiers' dreams and longings that take over nature by letting the former battlefield overgrow with summer grass, the overall message remains the same: man lags behind nature. In the present poem, this goes hand in hand with a certain sadness about the decayed cultural heritage, for which nobody seems to be interested anymore. Where no one walks, "violets" (Sumiregusa す み れ 草), which are assigned to the spring as a season word. The first five mores could in principle also be in the sense of "not very popular" (ninki ga nai 人 気 が な い).

[1] The author's names are reproduced taking into account the surname before the first or artist name, which is common in Japan.

www.ahaiga.ch The new edition of ahaiga has been online since April 05.10.2021th, XNUMX. Authors are invited for the new one

The jury reached over 1500 haiku on the occasion of the competition for inclusion in the haiku calendar 2022.